History of the STUDENT WORKER ALLIANCE ​ 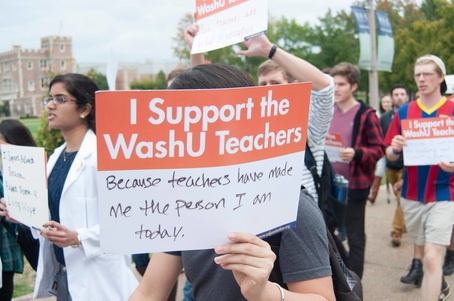 The original Student Worker Alliance was formed in the fall of 2003 around unfair firings of more than thirty Nicaraguan workers on H2B visas (for more on H2B visas, which are probably still in use by some WU contractors, see this article from the Southern Poverty Law Center https://www.splcenter.org/20130218/close-slavery-guestworker-programs-united-states). In the spring of 2004 we decided to focus on a living wage for all workers, including subcontracted workers, on WU's campus. We used the City of St. Louis' living wage ordinance for St. Louis contracts as a baseline. This was not a very high goal – it was enough to keep one worker and two dependents above the threshold to qualify for food stamps. However, it was $9.81/hr, which was more than almost any service worker on campus earned; today it is $12.37/hr. The primary workers affected were groundskeeping, food service, and janitorial.

The campaign got its first major kickoff with a rally at the beginning of April, 2004 on the Brookings steps, with more than fifty students and community allies. Chancellor Wrighton promptly formed a committee to investigate the conditions of subcontracted workers on campus, in accordance with the administration tactics described here: http://www.wupeopleshistory.com/wustl-administration-tactics.html.
SWA organized around the committee, providing research, applying pressure, and lobbying individual members. As a result of this organizing, the committee unanimously recommended a living wage in fall 2004. The Chancellor sat on this report for a few weeks and then released it the day before the Presidential debate was held on campus.

In order to escalate we decided to launch a sit-in on April 4th, 2005, occupying the admissions office in Brookings. We submitted a list of demands, first among them a living wage for all workers. The sit-in lasted nineteen days, ending on April 22nd. It attracted national media and substantial community support (especially from Jobs With Justice (www.mojwj.org). This made it the second longest sit-in in the previous decade, since the tactic began being used again widely by students. As in so many other things, WU was right behind Harvard (twenty-one days).

The strategy of the sit-in was straightforward. The U.S. News & World Report rankings include, among other things, the percentage of admitted students who choose to attend a school – the matriculation rate. Higher matriculation rates translate into a direct point boost to WU's ranking. When students arrived for April Welcome, they were greeted by a group of (smelly) students telling them that Georgetown, Harvard, and Stanford all paid living wages, and maybe they should go to one of those schools instead.

The SWA sit-in was not a complete victory, but won several concrete improvements. First, a wage floor of $8.50 an hour, phased in over two years. This was as much as a $2 per hour raise for groundskeepers, and even some workers who were already paid $8.50 saw raises in order to keep them above the floor (what economists call wage compression). Second, membership in the Workers' Rights Consortium, an anti-sweatshop monitoring organization for WU apparel (www.workersrights.org). Third, though less measurable, a shift in the administration's approach to subcontracted workers. When WU began offering Metro passes to employees, they included subcontracted employees. Today, their staff in charge of subcontracting are much more pro-worker than in 2005. The most substantial loss was that we were unable to get card-check neutrality, a mechanism for making it easier for workers to organize unions without retaliation by bosses.

While the University has made substantial improvements to the treatment of service workers in the past decade, the living wage target SWA used was based as much on what we thought was achievable as it was on the reality of working people's needs. The Fight for $15 has raised the bar for paying livable wages to all workers.

Beginning before SWA's work, adjunct faculty's pay had begun slipping. An adjunct in 1997 was being paid more per course than today -- BEFORE adjusting for inflation. After inflation, their pay has been cut by more than 50%. If you're a Wash U student, you've been taught, and taught well, by an adjunct, even if you didn't realize they weren't a tenured professor. It is critical to support the adjunct faculty's union struggle for a fair contract -- WU will set the standard for the St. Louis region at the very least.

​Editor’s note:
On Thursday April 14 at noon, there will be a student, faculty, and administration walkout for adjuncts. For more information, please refer to SWA’s Facebook event: https://www.facebook.com/events/897766093656087/